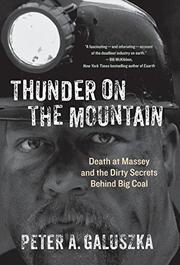 THUNDER ON THE MOUNTAIN

Death at Massey and the Dirty Secrets Behind Big Coal

by Peter A. Galuszka

Scrupulously researched account of coal’s resurgence, focused on the Upper Big Branch mine explosion that killed 29 miners in 2010.

Having lived there as a child, former BusinessWeek Moscow bureau chief Galuszka has particular empathy for the residents of Appalachian coal country. He consistently contrasts the hard work and poverty they endure with the ruthless, one-sided capitalism long practiced by coal companies. In his view, the 2010 disaster was no fluke, but the culmination of the shortsighted policies of Massey Energy and its then-CEO, Donald Blankenship, a notoriously pugnacious throwback to the robber-baron era. Himself a product of an Appalachian childhood, Blankenship makes a compelling if repellent central figure; he not only relished breaking unions and defying competitors, he even resisted basic safety measures. Galuszka outlines the complex relationship of the rural mining communities in West Virginia and Kentucky with the corporate energy concerns that have consolidated formerly independent mining firms, often with inadequate oversight. He notes that Blankenship played on the cultural conservatism of many miners to attack union and environmental efforts, despite the ecological devastation caused by strip mining and the controversial “mountaintop removal” method. The region’s persistent poverty notwithstanding, overseas demand for Appalachian coal suggests it will remain profitable for corporations undeterred by fearsome tragedies like the one at Upper Big Branch. Galuszka’s thoroughness provides readers a clear sense of the complex class issues at play in Appalachia and the difficult politics within coal-mining communities; he is attuned to both the lives of the miners and the maneuvers of the energy industry. Though his account is at times dry and repetitive, the author ably elucidates the latest chapter in a long history of antagonism around mining issues.