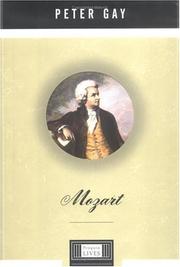 In the ‘60s, Yale historian Gay won a National Book Award for a history of the Enlightenment; for the third installment of the Penguin Lives he depicts the lightning career of its greatest musical mind.

Gay’s aim seems to be the application of a scholar’s circumspection to the Mozart myth, and the best that can be said of the book is that it establishes historical context with the efficiency so compressed a format demands.  The worst that can be said is that it’s dry.  That may be unavoidable, given the amount of information it has to convey in so brief a span.  But the few excerpts from Mozart’s notoriously bawdy and scatological correspondence explode through Gay’s measured academic prose like a carnival at a Mass.  He tries to remain evenhanded in treating the vexed subject of Mozart’s authoritarian father, but judicious citation does all the editorializing he needs.  Leopold to Wolfgang, 1778:  “You must with all your soul think of your parents’ welfare, otherwise your soul will go to the devil.”  In general, Gay’s analysis of the orchestral music suffers from the effusion and imprecision of the amateur:  “The dissonances and chromatic shifts Mozart so brilliantly deployed provided his astonished listeners with moments of simple poignancy or sheer delight…To experience them is to enjoy a spectacle of energy translated into beauty.”  But he fares better with the operas, which are clearly his passion.  And surprisingly, his austere demystification of the most overly dramatized episodes in Mozart’s life – the anonymous late commission of a Requiem Mass, his purported poisoning – imbue its end with even greater poignancy:  fate and conspiracy are easier to assimilate than bad luck and incompetent doctors.  One month music’s supreme genius was a healthy and productive 34-year-old; the next month, as it happened, he was dead.