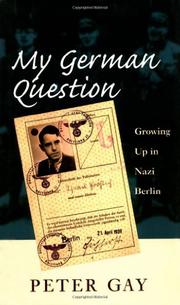 Growing Up in Nazi Berlin

A disappointingly lackluster memoir focusing on the six boyhood years (1933—39) Gay spent in Nazi Berlin. All the intellectual and stylistic dimensions that make master historian and biographer Gay (author of the five-volume The Bourgeois Experience, etc.) such a superb academic writer—a somewhat detached, reflective, intellectually thorough and elegant approach’serve him less well when writing autobiographically. For example, even when describing the November 1938 national pogrom known as Kristallnacht, he gives short shrift to his own observations and reactions. Rather, he spends some time commenting upon psychohistorian Peter Loewenberg’s view of the event as a Nazi-organized “degradation ritual” against the Jews. Perhaps because he was a sometimes doted-upon, only child in an upper-middle-class, highly assimilated Jewish family whose members were able to leave before the “Final Solution,— Gay was partly insulated from some of the worst anti-Semitic and other horrors of the Third Reich. But there are some passages when his writing does have a certain crisp immediacy, as when he describes a family friend whom Gay encountered a month after the friend was released from a concentration camp: “he had visibly aged, looked deathly pale, seemed disoriented, I thought almost senile.— He also has some fine mini-profiles of both individuals who betrayed his family and a few who, with considerable courage, assisted them. In general, his writing comes more alive when he describes his experiences as an adolescent refugee, first in Havana, then in Denver. In large part, however, while Gay repeatedly describes Nazism as a “poison” from which his psyche has not to this day fully detoxified, he doesn’t quite succeed in having the reader really understand what the noxious, totalitarian, and ultimately murderous ambience of the Third Reich felt like day-to-day. Perhaps this is because, as Gay states in his acknowledgments, setting down this account proved “the least exhilarating assignment I have ever given myself or received from others.” (50 b&w illustrations, not seen)