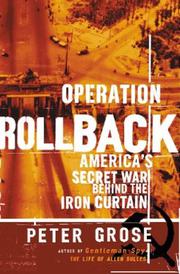 Employing recently declassified documents, Grose (Gentleman Spy: The Life of Allen Dulles, 1994, etc.) pieces together the clandestine antiCommunist strategy that emerged in the US intelligence community after WWII.

Grose’s tale begins in 1946 as W. Averell Harriman, US ambassador in Moscow, yields to his successor, George F. Kennan, whose role in the emerging antiSoviet policy would be of ``central importance.'' By 1948, Kennan and others had developed a ``remarkable initiative'' (named Operation Rollback only after it was discovered in the 1990s) that would ``start with innocuous propaganda and persuasion, then proceed directly into sabotage, subversion, and paramilitary engagement.'' (Grose credits Joseph Goebbels, Hitler’s propagandist, with creating the phrase ``Iron Curtain,'' whose rollback this operation was intended to accomplish.) Postwar Europe was a ``pit of human and physical misery,'' with millions of people homeless or otherwise uprooted—a fertile field for Soviet expansion—and Western powers watched helplessly as Stalin indeed moved swiftly to dominate eastern Europe. Grose follows the careers of an impressive cast of characters on both sides of the Iron Curtain: Allen Dulles (who became CIA director), Kim Philby (the Soviet master spy whose efforts thwarted many of Rollback’s maneuvers), Whittaker Chambers, Alger Hiss, and William Sloane Coffin (a US agent during Rollback who later became an antiwar activist during the Vietnam conflict). By 1952, contends Grose, Rollback was spending $100 million, without even cursory congressional oversight. Some funds went for quixotic plans—like using highaltitude balloons to drop propaganda leaflets (``four hundred tons of reading matter'') on eastern Europe. Others went for the arming, training (incredibly, Dachau was one site), and deployment of small military forces whose incursions into Albania and even the Soviet Union itself were quickly stifled by local forces alerted in advance by Soviet intelligence, whose organization was ``far ahead of the West in building agent networks.''

A fascinating chronicle that casts a welcome light on policies and procedures unknown by virtually all Americans.