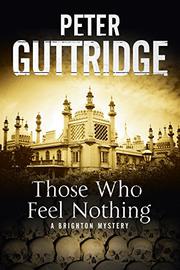 THOSE WHO FEEL NOTHING

The Brighton police discover a connection between a scandal at the Royal Pavilion and looting at Angkor Wat.

After losing his job over a raid gone bad, former Chief Constable Bob Watts has just been appointed Brighton’s first police commissioner when his ex-lover DI Sarah Gilchrist and her brainy detective sergeant Bellamy Heap catch a case that reveals that Bernard Rafferty, Director of the Royal Pavilion, has long been digging up women's graves. Many of the mummified remains are posed around his house, all dressed up for a party. When the police check out storerooms in the Pavilion, they find bags of bones, sealed-up tunnels and crates of unauthorized Asian artifacts. Half a world away, in Southeast Asia, Watts’ old service buddy, security expert Jimmy Tingley, is pursuing the man he thinks caused the death of his Eurasian wife. In the chaos following the fall of Cambodia, Tingley went in with a team sent to rescue several captured sailors from a prison notorious for torture. Also imprisoned there were his wife and her archaeologist father. Tingley was betrayed and abandoned by his companions, who had actually come to steal Cambodian treasures. He followed them but eventually heard they were killed along with his wife. Now Tingley asks Watts for help because he thinks the man he seeks is using a Brighton antique shop as a cover for smuggling artifacts and maybe something more dire. The two cases merge in a startling denouement.

Guttridge brings back several favorite characters from earlier installments (The Devil’s Moon, 2013, etc.) in a clever puzzle that links more of Brighton’s secrets to the ongoing dilemma of protecting cultural treasures from theft or destruction by armed conflict.