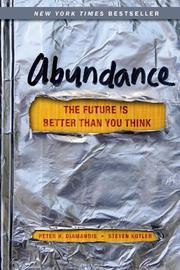 The Future is Better Than You Think

Forget Club of Rome gloom and doom. If the future isn’t necessarily bright enough for shades, then, write high-tech pioneer Diamandis and science journalist Kotler (A Small Furry Prayer: Dog Rescue and the Meaning of Life, 2010, etc.), things are going to work out just fine.

The title speaks volumes. A tenet of capitalism is that resources are scarce, which justifies our scramble to get what we can. Yet, write the authors, “when seen through the lens of technology, few resources are truly scarce, they’re mainly inaccessible.” So drinking water is scarce and getting scarcer? There’s a big ocean out there; what remains to be done is to develop some method to desalinate the ocean’s water “in the same way that electrolysis easily transformed bauxite into aluminum.” Of course, there is also a major shortage of fossil fuels—but no shortage of sunlight, and in fact more than 5,000 times as much solar power available as we could possibly use in our wildest dreams. It will bring some readers up short to contemplate the abundance that Diamandis and Kotler project in the face of the stark reality that there may well be 10 billion humans on the planet by the year 2050, but that doesn’t daunt the authors much, given the human talent for engineering our way out of trouble. Engineering is a major part of their program, as “the purview of backyard tinkerers has extended far beyond custom cars and homebrew computers, and now reaches into once esoteric fields like genetics and robotics.” What about the health-care crisis? Well, nothing a few generations of robotic surgeons can’t help, if not cure. Food crisis? Just 150 vertical-farm skyscrapers could feed all of New York City. And so on, to the point that there seems to be no problem that the authors find insurmountable, or even especially daunting.

A nicely optimistic look at a matter that usually brings out the darkest thoughts among prognosticators—if a touch starry-eyed, at least a dream worth nurturing.