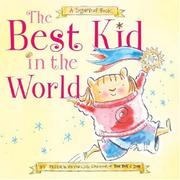 THE BEST KID IN THE WORLD

In SugarLoaf’s second outing, the charming tot learns that it is not always what you do that counts, but the thought behind it. SugarLoaf is enjoying celebrating her older brother Spoke’s birthday. That is, until Gramma totes out the Remembering Box, filled with Spoke’s most special things: a stick, a book he wrote, his first lost tooth and his Best Kid in the World Award. It’s this last that rankles. Inspired to do good deeds after learning that it was his helpfulness that won him the award, SugarLoaf has good ideas, but fails in each execution, leaving a string of disasters as she goes. In spite of it all, Spoke and the family hand off the sparkly award for her efforts. Reynolds’s watercolor characters are delightfully expressive, especially SugarLoaf deep in thought, tongue poking out of the corner of her mouth. This warm, family-centered story is sure to keep sibling rivalry at bay, even if only for a short time. A sweet new chapter in the life of SugarLoaf. (Picture book. 3-7)