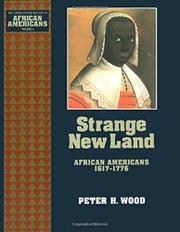 In The Young Oxford History of African Americans series, a thoroughly researched, thoughtfully written history starting with the first Africans on the continent to American blacks during the Revolution. The subtitle, ``African Americans 16171776,'' is misleading: Wood (for adults, Black Majority, 1974, etc.) begins around 1500, with the emergence of the Spanish slave trade. From there, he traces the role of Africans in the earliest settlements in North America and describes the different policies towards them under Spanish, French, Dutch, and British jurisdiction. The rest of the book—illustrated with black-and-white maps, reproductions, and photographs—deals with the early history of American slavery, specifically with the institutionalization of racism. At the same time, Wood looks at the culture and everyday life of slave communities, illustrating his narrative with a number of intriguing biographies. While his selection of facts and figures is illuminating throughout, what makes the work a particular pleasure are Wood's inspired discussions; he ably links facts and puts them into larger contexts for readers. An obscure chapter in American history, rendered vividly. (chronology, bibliography, index) (Nonfiction. 10-12)