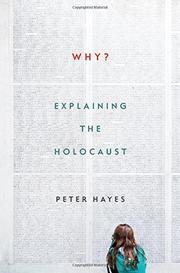 How could a civilized nation have brought a self-professed racist and xenophobe to power and then stood by as millions were murdered? It’s not a mystery, according to this important overview of the Shoah.

It does not do, Hayes (Emeritus, Holocaust Studies/Northwestern Univ.; From Cooperation to Complicity: Degussa in the Third Reich, 2007, etc.) notes at the outset, to confront the Holocaust and its legacy of genocide and terror with words like “incomprehensible” and “unfathomable.” Such words amount to “an assertion of the speaker’s innocence—of his or her incapacity not only to conceive of such horror but to enact anything like it.” The German-speaking world was full of such supposed innocents, who protested that they knew nothing of it but enabled and participated in the system all the same. The Holocaust, writes the author, is eminently knowable: “it was the work of humans acting on familiar human weaknesses and motives: wounded pride, fear, self-righteousness, prejudice, and personal ambition being among the most obvious.” Proceeding from the provocative question, “why another book on the Holocaust?”—the entire book is a careful answer to it—Hayes examines precipitating events and conditions, such as a long European tradition of scapegoating and anti-Semitism given new weight by the horrors of World War I. He looks into the participation of sectors of society that normally are not singled out in such accounts, such as the collusion of the German pharmaceutical industry in developing the mechanisms for mass death, and he delves into some particularly thorny questions—e.g., the old saw, “Why didn’t more Jews fight back more often?” One answer: a civilized person is (too?) often inclined to follow orders, even at the risk of their own ruin, “in hopes of preventing them from getting worse.” Throughout, Hayes writes lucidly and with generous spirit.

“Beware the beginnings,” admonishes a German proverb. This noteworthy book is a chilling compendium of warning signs, past and present.