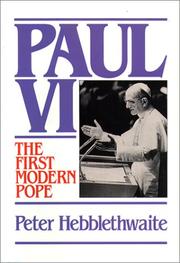 A well-researched, sympathetic biography of the self-effacing pontiff who steered the Roman Catholic Church through the tumult of Vatican II. Legend has it that, as Cardinal Giovanni Battista Montini, Paul VI (1897-1978) was upbraided by Pope John XXIII for his ``Hamlet'' tendencies, and, indeed, during his own 15-year pontificate, Paul often suffered by comparison with his ebullient predecessor. But Hebblethwaite (In the Vatican, 1986, etc.), an ex- Jesuit and Vatican correspondent for the National Catholic Reporter, persuasively argues that Paul was ``the most naturally talented man to become pope in this century.'' Intellectual (the son of a liberal Italian journalist), friendly in one-to-one encounters, and unusually knowledgeable about the non-Catholic world, the young Montini became a valued aide of Pius XII in the Vatican's Secretariat of State, where he witnessed firsthand the Church's battles against Fascism and Communism. But after 18 years of selfless service, he unaccountably fell from favor and was kicked upstairs with an appointment as Archbishop of Milan. It was under John XXIII that Paul finally became a cardinal and, Hebblethwaite shows, the architect of the agenda that kept the Second Vatican Council from spiralling out of control. Paul's achievements as pontiff (ecumenical outreach to alienated churches; reform of the conservative Curia; greater expansion of the role of women in the Church; the balancing of collegial discussion with papal authority) are weighed against what the author sees as his mistakes (the bans on birth control and clerical matrimony; inability to disentangle messy Vatican finances, resulting posthumously in the Sindona banking scandal). Using interviews and a wealth of unpublished material, Hebblethwaite depicts Paul as a ``good and holy man,'' tireless missionary, eloquent advocate for the poor, and—despite the carping of later critics (and unlike Pope John Paul II)—a comparative font of tolerance toward dissenting theologians. An insightful account of a pope who rose above his deep self- doubts to become a pivotal figure in religious—and contemporary- -history.