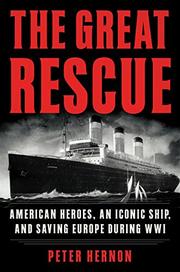 American Heroes, an Iconic Ship, and Saving Europe During WWI

An intriguing work of World War I research resurrects the little-known history of a massive German luxury liner that was confiscated and retooled for the American war effort.

In this lively look at the history of the Leviathan, once known as the SS Vaterland, the flagship of the Hamburg-American Line, Chicago Tribune editor Hernon (8.4, 1999, etc.), who was also an investigative reporter for the St. Louis Post-Dispatch, unearths a fresh aspect of America’s war effort. The ship, cruising into New York Harbor from Hamburg in late July 1914, was the largest vessel afloat at 950 feet—67 feet longer than the Titanic, which had perished disastrously at sea two years earlier. Due to that earlier disaster, the Vaterland was equipped with enough lifeboats for the 5,000-plus passengers and crew, both first-class and steerage. Yet the German crew of this behemoth was quickly halted in its efforts to prepare the vessel for a quick turnaround: war was declared in Europe in the beginning days of August, and along with other German ocean liners, the Vaterland would spend the next three years tied up in a Hoboken, New Jersey, pier. Using alternating points of view of some of the characters involved—e.g., Saturday Evening Post reporter Irvin Cobb and U.S. Navy officers and changing skippers—Hernon chronicles the tension of these early days when the U.S. was just declaring war on Germany and German ships lying in American harbors were being deliberately sabotaged before falling into American hands. Eventually, the Vaterland was refitted as the Leviathan and was packed with 10,000 American Expeditionary Force troops under the direction of Gen. John Pershing. The ship ferried them to the battlefields of France and back, through nightmarish submarine attacks, from December 1917 through the Armistice. Hernon also chronicles the contributions of decorated African-American troops.

A wise, elegant study to add to the World War I archives.