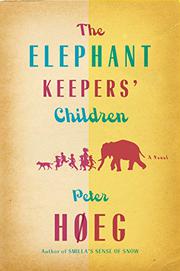 Featuring quirky names like Leonora Ticklepalate and Sinbad Al-Blablab; precocious, resourceful teenagers racing to save their parents; adolescent romance; and a series of adult-deceiving dodges, Høeg’s (The Quiet Girl, 2007, etc.) latest has a definite crossover/young adult flavor. Set on the fictitious Danish island of Finø, it introduces the Finø family: children Hans, Tilte and Peter, and parents pastor Konstantin and his inventor wife, Clara. This couple disappeared once before, having developed some kind of spiritual fraud system involving his sermons and her special effects, but the children have indulged their parents’ history of swindling because they are “elephant keepers,” containing something bigger than themselves, namely their yearning for God. Now, the two are missing again and Peter and Tilte must go to their rescue. An endless sequence of whimsical episodes ensues as the children give social services the slip, con their way off the island and head toward a Grand Synod of faiths where they suspect their parents are planning an equally grand theft of religious artifacts. Høeg has an endless menu of oddities to stir into his story; whether thriller, fantasy or disquisition on spiritual belief, love and parenting does successfully invent an inexhaustible landscape all its own.

This self-indulgent, idiosyncratic and immensely long story will either charm its readers into submission or utterly exhaust their patience.