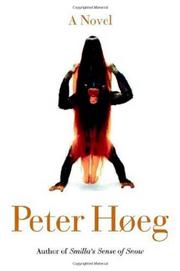 THE WOMAN AND THE APE

Heg's fourth novel (his third, the international success Smilla's Sense of Snow, 1993, having been the first published here) is an energetic fable about relations between the animal kingdom and its human exploiters—more than a little didactic in spots, but distinguished by enough wit and invention to redeem a dozen lesser books. The story begins in London when a ``dwarf chimpanzee'' escapes from animal smugglers and is immediately captured and targeted for exhaustive experimentation by a research institute affiliated with the city's zoo. Behavioral scientist Adam Burden and his steely sister Andrea, who works for an Animal Welfare Foundation, see in their astonishing find (``a new and hitherto unknown mammal, an apparently highly intelligent anthropoid ape'') a career-making opportunity. But their plans are thwarted when Adam's Danish-born wife Madelene, a lissome alcoholic, discovers in the ape (named ``Erasmus'') a fellow sufferer whose captivity echoes her own (as a tamed, well-behaved helpmate and showpiece), and also a potential soulmate. Forswearing drink, Madelene craftily subverts her husband's careerist politicking, and—aided by the smuggler's cheerfully criminal driver—runs off with Erasmus. The novel really picks up seriocomic steam as Madelene and Erasmus learn to communicate (he can talk, and is a quick learner), make love in the treetops, and enjoy a mock-Edenic ``idyll'' unobserved in a junglelike wildlife preserve. Everything climaxes during Adam's acceptance speech as he's being installed as the London Zoo's new director—with dramatic proof that Erasmus isn't the only creature of his kind. It's a romp, in more senses than one, and Heg manages, against odds, to shape both the story's discursiveness and its ingenious plot toward a smashing and emotionally satisfying conclusion. Heg is an adventurous and intelligent writer whose future course seems, happily, impossible to predict. He has made himself, in a few short years, one of the essential contemporary novelists. (First printing of 100,000)