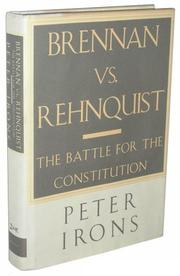 The Battle for the Constitution

A ho-hum digest of 100 Bill of Rights cases decided by justices Brennan and Rehnquist along predictable ideological lines. ``This is not an insider's account,'' warns Irons (Political Science/Univ. of California, San Diego; The Courage of Their Convictions, 1988, etc.) in his preface. ``I did not interview either justice for this book. Neither have I talked with former clerks or looked at private papers.'' Bad move. Had Irons provided some behind-the-robes analysis, this book might have had drama. (Irons himself acknowledges Brennan's legendary ability to use his charm to win votes in controversial cases.) And had he focused on far fewer cases—say, ten—his analysis might have had some depth. Instead, this numbing case-by-case-by-case summary provides little insight into the jurisprudence of the men who, for 18 years, were the Court's leading voices on the left and right—and even less insight into their personalities. After a perfunctory stab at characterizing each justice in a chapter-long biography, Irons proceeds to march through the Bill of Rights, offering an overly dense historical context for each amendment and then quoting from Brennan's opinion, on the one hand, and Rehnquist's on the other. Most of the big constitutional issues of the post-Warren Court are here—abortion, affirmative action, the death penalty, the right to die, school prayer. But all Irons offers is the revelation that Brennan consistently votes for individual litigants against the government, and uses the word ``dignity'' in his opinions a lot, while Rehnquist sides with state legislatures and the police, and relies on the word ``deference.'' (Fans of Rehnquist will chafe at the frequent snide comments about his proclivities for ignoring precedent and distorting evidence—but it's unlikely that this tedious book will generate much heat on the subject.) Plodding he-said/he-said treatment that makes for strenuous cover-to-cover reading.