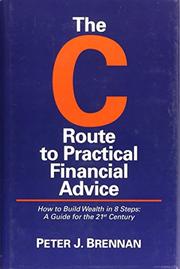 How to Build Wealth in 8 Steps; A Guide for the 21st Century

A seasoned financial journalist offers easy-to-follow tips for building wealth in his debut.

Brennan, a longtime business reporter for outlets such as Bloomberg News, offers down-to-earth financial advice that aims to help the average Joe become and stay rich. He begins with a simple assumption: “Everyone does want your money.” The best way for innocent, hardworking Americans to protect themselves from ruthless financial sharks, he says, is to be aware of his book’s eight Cs: counsel, commentary, career, costs, crooks, castles (real estate), currency and the investment choices of a family called the Coads. Keeping these in mind, he argues, will help one think like a successful executive and build wealth. Each chapter of this slim volume delves into a different area, such as whom to turn to for financial advice or the pleasures and perils of investing in real estate. The author’s tone is no-nonsense, and he doesn’t pull punches; among his words of wisdom: “Don’t ever take advice from someone wearing a Che Guevara shirt” and “You can find…houses in Detroit now for only a few thousand dollars. Don’t buy one.” That said, the blunt, straight talk sometimes veers into curmudgeonly territory, as when the author lambasts his friend’s decision to become a massage therapist or dismisses Occupy Wall Street as a “crowd of youngsters.” Still, Brennan is well-informed and often persuasive, even when his advice runs counter to conventional wisdom; at one point, for example, he offers a detailed argument for buying new, rather than used, cars. Also helpful are his many detailed illustrations of financial concepts, including a chart that shows why investors are better off buying a bond than a boat. His section on investment scams is particularly enlightening; he offers telling anecdotes about the behavior of con artists, drawn from his own time as a reporter. Sometimes, however, Brennan’s media background gets in the way, particularly in the chapter on “commentary,” which he takes as an opportunity to discuss the implosion of the daily-newspaper business, the rise of social media and the importance of fact checking. It’s engaging material on its own, but it reads like a chapter from another book.