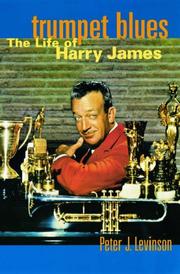 The Life of Harry James

Leading jazz publicist Levinson makes his literary debut with this biography of the late bandleader, who in the ’40s and ’40s established himself as a rival to Benny Goodman and Tommy Dorsey, among others. James’s early years were particularly formative, as he was born to parents who devoted much of their lives to performing for the circus. “Young Harry first met his public at the age of 11 days, when his parents introduced him to the circus audience,” Levinson writes. With his look at the life of circus entertainers in the early part of the century, Levinson hooks the reader immediately. He makes James’s progression from childhood circus performer to budding musician at age 12” when he was “the youngest circus bandleader in the world”—a seamless evolution. By the early 1930s, when James was struggling to succeed as a trumpet player, the reader has a strong sense of his musical growth. It wasn’t until December 1936, when Goodman—who would stay friends with James throughout their lifetimes, despite their competition for bookings—invited him to join his band, that the trumpeter became a star. Levinson captures the era well, citing the impact of WWII on popular music, telling stories of the biggest stars of the time (including Goodman, Dorsey, James’s hero Louis Armstrong, Lionel Hampton, and Frank Sinatra, whom James helped discover by giving the “kid” his first recording gig) and the bigotry integrated big bands faced on the road. To his credit, Levinson, while hardly ignoring James’s legendary womanizing, gambling, and drinking, as well as his lengthy marriage to pinup queen Betty Grable—ultimately victimized by all of James’s vices—avoids turning the bandleader’s life into a melodramatic soap opera. Instead, he concentrates on the music. Impressive, and a fascinating read not only for fans of jazz, but for students of 20th-century history, Hollywood, and the music business.