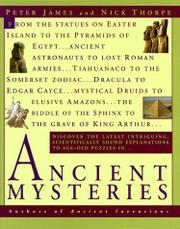 A thoughtful and absorbing analysis of more than 30 of the most intriguing artifacts, occurrences, and myths of the prehistoric, ancient, and medieval worlds, by freelancer James and archaeologist Thorpe (King Alfred’s College, UK). Conundrums like the mythical lost continent of Atlantis, the legend of King Arthur, the Easter Island statues, and the curse of Tutankhamen have been overworked in recent years by cultists and speculative writers, who have often, without the benefit of critical scholarship and analysis, propounded outlandish and even bizarre theories. Too often, debunkers have responded simply by dismissing such theories rather than by inquiring more closely into the mysteries themselves. Marshaling the most current evidence in each case, the authors here endeavor “to chart a middle course between the uncritical enthusiasts and the professional skeptics.” James and Thorpe explore lost civilizations and the catastrophes that destroyed them, astronomical phenomena, architectural wonders, ancient reworkings of the landscape, voyages and discoveries, ancient myths and legends, hoaxes, and supernatural occurrences. Some myths, like that of the lost continent of Atlantis or that of the Christian African king “Prester John,” turn out to have been precisely that—either gross embellishments of real events or total fabrications. Others, like the Star of Bethlehem (the authors conclude that the Star may have actually been Halley’s comet in 12—11 B.C.), King Arthur (possibly a historical Dark Ages warlord named Riothamus), and Robin Hood (among other theories, a servant of Edward II), appear to have some arguable historical basis. Among other enigmas, the authors plumb Stonehenge (a neolithic sun temple, not built by the Druids), the legend of Dracula, a lost Roman army that may have found its way to China, a Viking rune-stone in Minnesota (a likely hoax), and an ancient visit by a Welsh prince to America (just possibly true) An engrossing journey through the riddles of the distant past. (Book-of-the-Month Club selection, Quality Paperback Book Club selection.)