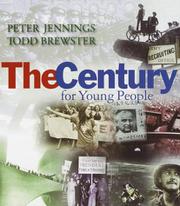 THE CENTURY FOR YOUNG PEOPLE

Just in time for the millennium comes this adaptation of Jennings and Brewster’s The Century (1998). Still a browsable, coffee-table edition, the book divides the last 100 years more or less by decade, with such chapter headings as “Shell Shock,” “Global Nightmare,” and “Machine Dreams.” A sweeping array of predominantly black-and-white photographs documents the story in pictures—from Theodore Roosevelt to O.J., the Panama Canal to the crumbling Berlin Wall, the dawn of radio to the rise of Microsoft—along with plenty of captions and brief capsules of historical events. Setting this volume apart, and making it more than just a glossy textbook overview of mega-events, are blue sidebars that chronicle the thoughts, actions, and attitudes of ordinary men, women, and children whose names did not appear in the news. These feature-news style interviews feature Milt Hinton on the Great Migration, Betty Broyles on a first automobile ride, Sharpe James on the effect of Jackie Robinson’s success on his life, Clara Hancox on growing up in the Depression, Marnie Mueller on life as an early Peace Corps volunteer, and more. The authors define the American century by “the inevitability of change,” a theme reflected in the selection of photographs and interviews throughout wartime and peacetime, at home and abroad. While global events are included only in terms of their impact on Americans, this portfolio of the century is right for leafing through or for total immersion. (index) (Nonfiction. 9-12)