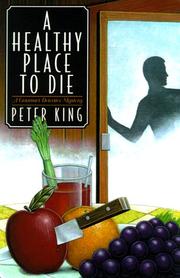 A HEALTHY PLACE TO DIE

Carver Armitage, hospitalized for an unspecified `male problem,` arranges for his fellow foodie, the Gourmet Detective, to stand in for him at a toney cooking conference at a spa in the Swiss Alps. The G.D. has barely unpacked his apron and his leer when tall, blond, beautiful staff members are trying to kill him in the mud bath, and his tête-à-tête with a magazine columnist is interrupted by her death and her body's subsequent disappearance. Undaunted, the G.D. ties on his apron, demonstrates the proper procedure for preparing Shrimp Nissarde, and chats up a retired movie star with gorgeous eyes, a supermarket entrepreneur, a TV impresario, and a large cast of spa attendees, all of whom pay more attention to the menus and their stomachs than to each other. A reporter arrives and slings innuendo at the G.D. The dead columnist's editor checks in and dies in the herb garden—and again in the ice cavern. Carver Armitage, out of the hospital and presumably hungry, pops by. The G.D. demonstrates the proper way to roast a duck and bedeck it with orange. The G.D. is almost killed again, then learns that the husband and wife couple supervising the spa kitchen may have been involved in a poisoning in upstate New York. Disasters happen everywhere (except in the kitchen) before the G.D. sedately blots his lips with his napkin, ready for another go at the mud bath, this time with the movie star.

Aimed, like its predecessors (Death Al Dente, 1999, etc.), at those who get turned on browsing cookbooks.