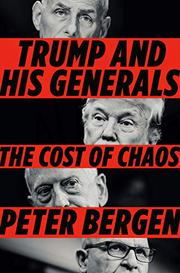 TRUMP AND HIS GENERALS

A timely account of the current president’s tumultuous relationships with nearly everyone in the national security establishment.

CNN national security analyst and New America vice president Bergen (Co-Director, Center for the Future of War/Arizona State Univ.; United States of Jihad: Investigating America's Homegrown Terrorists, 2016, etc.) focuses his latest insightful exposé on Donald Trump’s national security strategy—or lack thereof—which has largely alienated his slew of Pentagon and National Security Agency staff. The author opens with a turning point six months into Trump’s presidency, July 20, 2017, when the president—spurred on by his chief strategist, Steve Bannon—rejected his top generals’ advice about the long-standing post–World War II order bolstered by the U.S. Trump favored dumping NATO and insisting U.S. allies “stand up and write some checks” for a change. “For Trump,” writes Bergen, “mutual defense alliances such as NATO were largely worthless.” Through meticulously documented interviews and research, the author amply shows how the Trump administration has stubbornly stuck with this free-wheeling playbook of slash and burn: berating NATO allies; implementing a “Muslim ban” against countries that had nothing to do with terrorist attacks against the U.S., such as Syria, and thus deepening the refugee crisis there; threatening to withdraw troops from Afghanistan without consulting or even informing his generals; and standing by internationally excoriated authoritarian leaders such as Putin and Kim Jong-un despite repeated demonstrations of their perfidy. Trump’s choice of generals has become a revolving door, beginning with Mike Flynn, who was obsessed with wacky conspiracy theories and fired after less than one month on the job as national security adviser; H.R. McMaster, who departed after a year as Flynn’s predecessor; James Mattis, who left after two years as secretary of defense; and John Kelly, who eventually resigned as chief of staff. As Bergen notes, “Trump…set records for the level of turnover at the White House and his cabinet.”