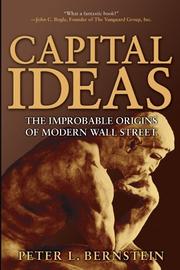 A savvy appreciation of how a small band of disinterested academics has revolutionized the way Wall Street and its offshore counterparts manage the world's investment wealth. A securities-industry veteran and founding editor of The Journal of Portfolio Management, Bernstein provides a lively, lucid history of the scholarship that has helped advance institutional investing beyond the more-art-than-science stage. For openers, he focuses on an obscure French polymath whose turn-of-the-century doctoral thesis on the unpredictability of stock prices anticipated Einstein's work on relativity. Over the years, this Gallic ground-breaker was followed by other pioneers, including an English statistician who put paid to any notion that securities analysts can pick undervalued issues with any consistency, and an American astronomer whose main claim to financial fame was his discovery that stock prices move in random patterns. Eventually, a host of Nobel laureates in Economics (Harry Markowitz, Franco Modigliani, Paul Samuelson, James Tobin, etc.) contributed as well. As Bernstein makes clear, however, professional investors at bank trust departments, foundations, insurance companies, mutual funds, and elsewhere long resisted unconventional wisdom--in particular, that originating with ivory-tower theoreticians. Once the bear market of 1973-74 had wreaked its havoc, though, many of the recalcitrants conceded there just might be something in the idea of systematically controlling risk in the competition for above-average investment returns. At any rate, less than two decades later (with a big assist from powerful numbers-crunching computers), asset allocation, diversification, hedging, performance measurement, portfolio insurance, and allied techniques are norms, not novelties, in the management of large pools of money. While his text may prove a bit difficult for market tyros, Bernstein makes a fine job of tracing the town/gown links that are restructuring big-time investment strategy and practice.