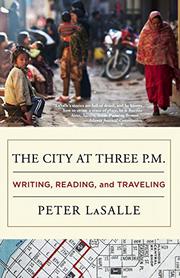 THE CITY AT THREE P.M.

A collection of what could be called literary travel criticism.

A professor of creative writing with an eclectic publishing career, LaSalle (What I Found Out About Her, 2014, etc.) has been anthologized as a travel writer (a piece from The Best Travel Writing 2010 concludes this volume) and earned praise for his award-winning fiction. Here, he explores terrain where his writing paths intersect, “traveling to a place where a document of literature I love is set and rereading the book there, to see what happens.” Written and originally published over a span of four decades, these essays find him contemplating Nathanael West in Los Angeles, experiencing the metaphysics of Borges in Buenos Aires, celebrating an obscure (in this country) Flaubert novel in Tunisia, following the alcohol-soaked ghost of Malcolm Lowry to Mexico. At one point he admits, “to be really frank, I am lost in a moment of wondering what the hell I am even doing on this trip, dodging some personal obligations back home and abandoning my writing for a few weeks; I know I’ve always used travel as a way to escape responsibility.” Yet he often obsesses over the courses he isn’t teaching and the fiction he isn’t writing while visiting locales far from his professional base of Austin, Texas, and his native Narragansett, Rhode Island. While establishing a bond, even an intimacy, with readers, he projects an air of superiority in his attitude toward better-known writers (“Richard Ford, a predictable writer who many critics tend to take too seriously”), fellow academics, younger females, and the “decidedly not-funny” Jimmy Kimmel. LaSalle exalts “the Flaubertian obsession of elevating prose itself to something close to sacred, the creation of it a visionary, semi-religious experience.” These are travel pieces (with the title essay the slightest), but they use travel mainly as a portal to literary celebration.

An up-and-down collection of essays on what a fiction writer does when he isn’t writing fiction.