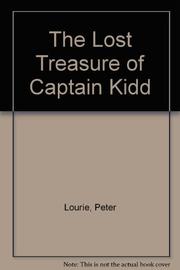 THE LOST TREASURE OF CAPTAIN KIDD

by Peter Lourie & illustrated by Chandler

Hardy Boysstyle action for the '90s. Killian, an angry and somewhat disturbed teen, along with his follower and sometime friend Alex, is determined to find the treasure that local legend says Captain Kidd buried on the shore of the Hudson River. Racing against another hunter, spurred on by a recurring dream, determined and reckless, Killian will let nothing stand in his way, not even his friendship with Alex, who narrates. In his first work of fiction, Lourie (Everglades, 1994, etc.) has created an exciting escapade that, though marred by too much obvious exposition at the beginning and a weak and rather unsatisfying ending, otherwise maintains a quick pace and is infused with and enlivened by the Hudson River setting. Killian is an intriguing character: His moodiness, competence on the water, knowledge of history and legend, and thrill-seeking mesmerize Alex, and bring out in him a courage he doesn't think he possesses. A fine, old-fashioned adventure. (b&w illustrations, not seen) (Fiction. 8+)