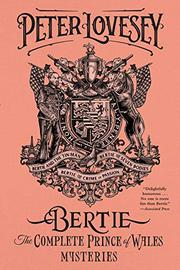 The Complete Prince of Wales Mysteries

In the absence of a brand-new mystery starring England’s most unlikely sleuth, His Royal Highness Albert Edward, Prince of Wales, Lovesey (Beau Death, 2017, etc.) supplies the next-best thing: a collection of Bertie’s three earlier appearances, originally published between 1987 and 1993.

Lovesey’s brief but informative Introduction notes that the first of these novels, Bertie and the Tin Man, was based on a real-life mystery, the suicide of notable jockey Fred Archer, who shot himself at the height of his career after asking his sister, “Are they coming?” The Prince of Wales, who takes a keen interest in horseracing, to the extent that his interest in anything can be described as keen, takes it upon himself to figure out why Archer would have killed himself. Though the results of his endeavors wouldn’t have encouraged most amateur sleuths, Bertie returns in Bertie and the Seven Bodies, a case that takes its model not from real life but from Agatha Christie’s interest in using nursery rhymes to structure her celebrated mysteries. Invited to Desborough Hall for a week of hunting, Bertie can’t help noticing that his fellow guests are being picked off at the rate of one a day following a nursery rhyme his wife, the long-suffering Princess Alexandra, points out to him. Lovesey makes Bertie come across as earnest and obtuse enough to keep the police away from Desborough while he produces a series of solutions that are proved hilariously wrong day after day. Bertie and the Crime of Passion finds Bertie in Paris, where legendary actress Sarah Bernhardt serves as his sidekick as he applies his unique skills to the riddle of who shot the fiance of an old friend’s daughter as he was dancing in a crowd of hundreds on the floor of the Moulin Rouge.

For all Lovesey’s ingenuity, the deepest pleasures here involve not the plotting—two of the three cases turn on the same well-worn red herring—but the charmingly invincible obtuseness of his narrator/sleuth, who remains as winning a loser now as he was 30 years ago.