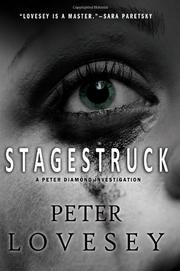 From the Peter Diamond series

The curtain has barely gone up when the pop star hoping to resurrect her glory days by switching from singing to drama begins to scream and tear at her face. Clarion Calhoun is rushed to hospital, her understudy goes on and the production is put in serious jeopardy. Disfigured from the caustic drain cleaner someone added to her face powder, Clarion decides to sue the theatre, a catastrophe only slightly diminished when Denise, who applied Clarion’s makeup, commits suicide in remorse. Battling a lifelong fear of theatres, Detective Peter Diamond (Skeleton Hill, 2009, etc.) steps in to sort out matters. His task is complicated by the actors’ ability to act innocent; the theatre management’s romantic proclivities and financial woes; the appearance of the grey lady (the resident theatre ghost); and the dreaded sighting of two dead tortoiseshell butterflies, which according to theatre lore presage tragedy. Furthermore, Diamond is saddled with Sergeant Dawkins, a vulgarly dressed, loudmouthed pendant who keeps volunteering for more work. Clarion, for unspecified reasons, drops her lawsuit, but on an unannounced visit to a performance is suffocated anyway with a plastic bag. Determined to get to the bottom of the bathos at Bath and pinpoint the origin of his theatre terror, Diamond slogs on, finally standing center stage to confront at least one of his nemeses.

Far from Lovesey at his best, without the wit, trickery and demonic plotting that has earned him silver, gold and diamond daggers from the British Crime Writers’ Association.