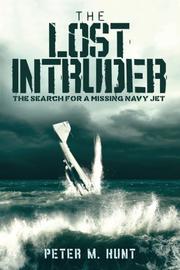 The Search for a Missing Navy Jet

In 1989, an A-6 Intruder, a Navy fighter jet, went down off the coast of Whidbey Island, Washington. For a variety of reasons—turbulent weather, rough tidal currents, and limited underwater visibility—the Navy search was unable to recover the $30 million aircraft. Eventually, they simply gave up, deciding that any further attempt would be “futile and cost prohibitive.” At the time that the Intruder went missing, Hunt was in the “ready room,” the Navy squadron’s command center; the aircraft’s disappearance was personal to him, as he’d flown it over 500 times. Over the next quarter-century, he fantasized about tracking down the lost plane on his own and accomplishing what the Navy couldn’t. This dream was unfortunately complicated in 2005 when the author, then a 43-year-old commercial airline pilot, was diagnosed with Parkinson’s disease. As a result, his flying days were over and his diving days were numbered. Still, even when he was scheduled to undergo major brain surgery, Hunt was more inspired than demoralized by his condition, and he committed himself to the thrilling, if improbable task, of finding the Intruder: “My battle with Parkinson’s did more than instill in me a hope of finding the jet,” he writes, “it fostered a profound belief that anything was possible if I honestly gave it my best effort.” The author’s account of his search is as meticulous as the preparations for it, showing how he doggedly pursued clues to the Intruder’s whereabouts like an investigative journalist. He also offers a candid discussion of his deteriorating health condition, his medical treatments, and the torpor that both eventually visited upon him, which made him turn to alcohol. Additionally, Hunt provides a brief history of the Intruder—a key player during the Vietnam War that was retired during Operation Desert Storm. The author’s prose is always crystal-clear and sometimes moving, particularly when he discusses the ways in which his quest revitalized his life in the face of physical decline.

An inspiriting story related with journalistic rigor and disarming frankness.