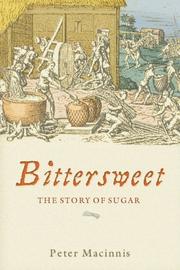 The Story of Sugar

From Australian science writer and broadcaster Macinnis, an informative and readable history of the simple substance that changed the world and often brought out the worst in people.

Sugar cane, a member of the grass family, was first discovered in the New Guinea jungle some 9,000 years ago. The locals found that chewing and sucking it was pleasurable; eventually they learned to cultivate it. A widely grown crop in the ancient civilized world, sugar’s darker history began when the returning Crusaders brought it into Europe. There, it was a luxury item, being both capital- and labor-intensive, until the opening of the New World, particularly the Caribbean islands and Brazil, gave European colonizers the abundant land and suitable climate necessary for growing cane. Because a huge labor force was required to work the plantations, the author writes, “Sugar and slavery seemed to go hand in hand.” Surveying the sweet stuff’s bitterest legacy, Macinnis unsparingly describes the appalling cruelty and dangerous working conditions inflicted on slaves and their not-much-better-off counterparts, indentured servants. He also writes of sugar’s influence on policy matters and history, such as Napoleon’s decision to hang onto France’s sugar-growing colonies and sell the others to the US in the Louisiana Purchase. Blessed with a fine sense of humor as well as a sense of history, the author leavens his otherwise dramatic tale with lighter moments and such oddities as a four-volume 18th-century treatise on sugar-making written in blank verse, from which he quotes. Only a hardhearted few could resist priceless gems like, “Of composts shall the Muse descend to sing, / Nor soil her heavenly plumes? The sacred Muse / Nought sordid deems, but what is base; nought fair / Unless true Virtue stamp it with her seal.”

Lively and entertaining: a splendid saga for the general reader. (6 maps)