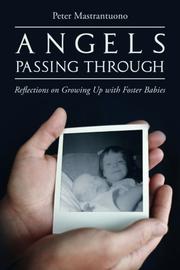 Reflections on Growing Up with Foster Babies

Mastrantuono’s debut memoir explores his experience growing up in a family that fostered dozens of babies.
In the politically and socially tumultuous late 1960s, Mastrantuono’s family was already sizable: In addition to his two biological siblings, his parents also adopted four children of diverse ethnicities. Remarkably, his parents made the decision to add to these numbers by fostering babies in need—not just a few, either. In a span of 10 years, the Mastrantuono family fostered more than 40 babies. In addition to their own schoolwork, friends and puberty, the children also had to diaper, feed, burp, bathe and soothe infants on an almost daily basis. Mastrantuono details his experience as a foster sibling to this multitude of babies and the indelible impact they had on his life. He also recounts the sometimes-heartbreaking stories of five particularly memorable foster children, including Denise, who stayed with his family for slightly less than two years and was ultimately taken from them despite their many petitions to adopt her. Although Mastrantuono’s childhood experiences will seem extraordinary to many, he describes them with clarity and illuminating detail. In fact, his memories are so unusual that readers may regret the book’s brevity; it’s less than 100 pages, after all. Although Mastrantuono interviewed his family and studied diary entries, few direct quotes are included, though they could have provided more insight. However, Mastrantuono excels at describing his own memories and helping readers understand not only why his parents chose to undertake such a momentous task, but also the effects, not always positive, their fostering had on the family as a whole. Mastrantuono delves a bit into the self-examination process he has undergone to deal with emotional issues, such as the void created by Denise’s absence and the fact that, as a foster family, they rarely learned what happened to the babies after they left. Although these instances can seem like personal exercises at times, they nevertheless inform and enrich Mastrantuono’s story, one that will no doubt inspire contemplation and discussion.
Short and bittersweet, this memoir offers a unique perspective on the foster care system and the reverberating effects on those within it.