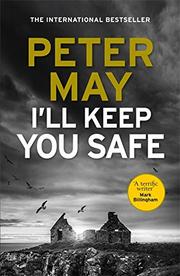 The death of her husband in a car explosion in Paris sends a woman searching for answers in the Hebrides in this expansive thriller.

By land or sea, transport to the Scottish Hebrides can be fiercely turbulent. This latest from prolific May (Coffin Road, 2017, etc.) offers smooth armchair travel to the dramatic and haunting location—and a mostly good mystery. The story begins at a textile fair in Paris as Hebrides natives Niamh and Ruairidh Macfarlane market Ranish tweed, their variation on iconic Harris tweed. Together for 10 years, the couple appear headed to dissolution. When Niamh sees Ruairidh leave their hotel with a woman she suspects is his mistress, she tracks them into the street, where their car explodes, killing both of them. Police initially, but briefly, see the earmarks of terrorism. Soon the investigators abandon that tack, and Niamh returns home to bury the pieces of Ruairidh’s shattered body. Here, May explores the couple’s past lives in a series of richly written, but perhaps discursive, flashbacks that often leave the mystery hanging and turn the work into a novel of two people growing up, courting, and coming together in the remote location. Painful and tragic events and relationships among family and friends become the focus. The characters—Niamh’s parents, a local police investigator, a vicious fashion designer, a childhood friend of Niamh’s who becomes a troubled adult—are animated by May’s sharp, perceptive details. The unraveling of the car bombing is not as fresh or as tight as the wrap-up to cases in some of May’s other works, though most readers will likely find the final revelation startling and satisfying. What remain consistent are May’s keen, perceptive descriptions of the Hebrides, where “jagged black rock…[stands] stubborn against the relentless power of the Atlantic.”

The uneven plotting would benefit from tightening, but May’s sense of place is as good as it gets.