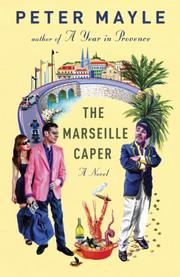 Now that Sam Levitt has recovered entertainment lawyer Danny Roth’s stolen wine from dodgy millionaire Francis Reboul (The Vintage Caper, 2009), his quarry wants to hire him for a job of his own.

Reboul is one of three candidates who’ve submitted bids to develop Anse des Pecheurs, a Marseille neighborhood that’s resisted builders for 120 years. One of Reboul’s competitors, Caroline Dumas, stands no chance because she’s a Parisian. But the other, Lord William Wapping, is an ex-bookmaker who’ll stop at nothing to win the contract—and who has Reboul’s old enemy Jérôme Patrimonio, chair of the committee who’ll be making the decision, in his pocket and the shady connections to undercut his rivals. Technically, Reboul wants Sam to masquerade as an architect in order to make a convincing presentation to Patrimonio’s committee while keeping Reboul’s involvement secret. Unofficially, Sam—with his lover and sometime-boss Elena Morales in tow—will need to deflect each of Wapping’s attempts to steal the project. Fortunately, Wapping is remarkably transparent and his hired thugs remarkably ineffectual. The lack of suspense leaves plenty of room for the Provençal dining, fine wines, regional history and geography, and local color that are Mayle’s main business. The result is the most relaxed caper you’ve ever encountered.

To compensate for the absence of plot complications, realistic dialogue or suspense, the meals sound great, the ebullient badinage is genuinely witty and Mayle wears his considerable knowledge of the area lightly.