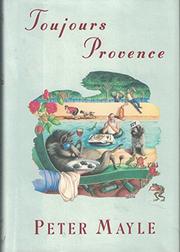 Second installment by GQ columnist Mayle of his country life in the Provencal region of southern France, following the delightful A Year in Provence (1990). Mayle, as keen and sunny an entertainer as ever, tells of French medicine, the drolleries of a French liver crisis, and the difficulties of trying to fill a prescription when an American visitor with mononucleosis needs a state-of-the-art antibiotic on Sunday. He reviews his mail, the new celebrity brought to him as the local English writer, his wife's gradual cooling toward visitors (pretty blondes make her snappish), and a signing at a Cannes bookstore during the film festival. Mayle gets much mileage out of his wife, whose Frenchified rationality makes her head of the household; she arranges birthday picnics, social occasions—and adores stray dogs. He checks out a choir of toads that may, through electronic rechanneling, sing La Marseillaise. He attends a combined wine-tasting and fabulous country meal that leaves him stuffed and unconscious. We go with him on a secret truffle buy as he hustles two kilos of smelly contraband from the French countryside to Heathrow in London. We dig up gold napoleons in his rose garden and sweep the premises with a metal detector; sit through a knockout Pavarotti concert in a 2,000-year-old outdoor Roman amphitheater while the tenor eats dinner offstage between arias. Mayle spends an evening researching varieties of pastis, an anise and licorice aperitif, two drinks of which will twist your nose; and finds his scholarly and detached attitude smoothly numbed. Very winish, dinerish—and absolutely gustatory.