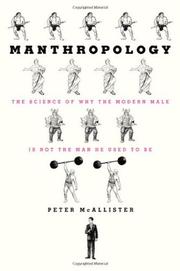 A paleoanthropologist offers a wry, dispiriting perspective on modern man.

McAllister (Anthropology. Univ. of Western Australia; Dracula Tooth, 2008, etc.) explains how his research opened up to him the nightmare of contemporary male inferiority: “I discovered, to my horror,” he writes, that “there’s nothing we can’t do that ancient men, and sometimes women, haven’t already done better, faster, stronger, and usually smarter.” He begins by opining that the man of 2010 is “the worst man in history,” in that historical narratives consistently suggest greater accomplishments by men of the ancient world, the Greco-Roman era and pre-agricultural societies. This is true in many categories, which he uses to organize the book: “Brawn,” “Battle,” “Beauty,” “Babes,” etc. In each chapter, McAllister bends his argument to the topic with an array of historical comparisons, which are certainly entertaining but occasionally arbitrary. In boxing and warfare, many earlier groups committed acts of bravery and ferocity that show up today’s ultimate fighters and even the training of America’s Special Forces. As for “Bravado,” Native American tribes such as the Sioux practiced brutal rituals that suggest great resistance to pain, and routinely tortured captives from rival tribes who bore such ordeals with contemptuous stoicism. The complex rituals of competitive beauty practiced by the African Wodaabe tribe puts to shame metrosexuals like David Beckham. Regarding erotic conquest, even Wilt Chamberlain withers next to the recorded behavior of ancient Indian kings. For McAllister, such disparate anecdotes lead to grim conclusions: “our sloth betrays not just our own genetic potential, but that of our sons too... we are sentencing them to a lifetime of brittle bones, weak tendons, and softened bodies and brains.” The author’s application of anthropological research is rigorous and the writing is sharp and often funny, but the overall approach proves repetitive.

An amusing but troubling study of manhood, offering scant hope for improvement.