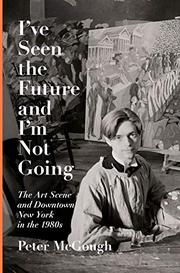 I'VE SEEN THE FUTURE AND I'M NOT GOING

The Art Scene and Downtown New York in the 1980s

Growing up in suburban Syracuse, McGough was shy, gay, and frequently bullied. In high school, he found refuge in the art room, peopled by “artists and outcasts” like himself, and he became recognized for his talent. After graduating in 1978, he headed eagerly to New York’s Fashion Institute of Technology, hoping to find sexual freedom at last. In his candid debut memoir, the author vividly conveys the turbulence and seediness of the “dirty and dangerous” West Village and of Times Square, “a mess of dirty old theaters” showing horror movies and pornography. “It was everything I dreamed of and more,” he admits, and he spent his tuition money in nightclubs, including the infamous Studio 54, and on rent for squalid rooms. When his money ran out, he took odd jobs illustrating, sketching, and, at one point, painting Danceteria, a new nightclub, where he also worked as a busboy. McGough’s life changed when he met David McDermott, an eccentric, charismatic artist who rejected the modern world as “cheap and vulgar,” claimed he was a genius (and, sometimes, Jesus), and carefully curated environments for himself filled with Victoriana. McDermott’s world, McGough writes, “became immediately alluring, and I felt safe and cut off from a world I thought harsh and cruel.” Soon he, too, was wearing shirts with highly starched detachable collars, frock coats, and homburg hats: “We felt we were making a statement by our very existence.” The two became lovers and artistic collaborators, signing their works with both surnames and eventually gaining a reputation among dealers, collectors, curators (they showed twice at Whitney Biennales), and fellow artists such as Jean-Michel Basquiat, Andy Warhol, and Julian Schnabel. In a world filled with narcissists, grifters, and assorted lost souls, Schnabel and his wife, cleareyed and compassionate, stand out. Bitterness and anger sometimes surface as the author recounts betrayal, severe financial hardship brought about by McDermott’s wanton spending, and years of suffering from AIDS.

An intimate portrait of personal struggles and artistic triumphs.