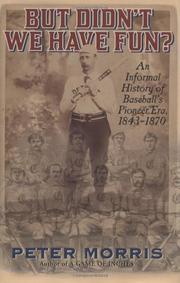 BUT DIDN’T WE HAVE FUN?

How America’s pastime got its swing.

In the three decades before the Civil War, baseball was in its infancy. There were no standardized rules for the game, much less a consensus on what to call it: Depending on location and the culture of its players, it might be known as wicket, town ball, round-town, the Massachusetts game or countless variations thereof. Using first-person recollections, recorded statistics and newspaper clippings, Morris (Level Playing Fields: How the Groundskeeping Murphy Brothers Shaped Baseball, 2007, etc.) identifies the era as crucial to baseball’s emergence as the national sport. Some facts about the early game—each presented in assiduous detail—will likely surprise modern enthusiasts: e.g., the procedures of the game before designated pitchers; players having to actually hit a player with the ball to record an out; and the traditional use of a single ball during the game, typically memorialized by shellacking and proudly displaying it. While Morris considers the official founding, in 1845, of the Knickerbockers as the first important baseball club, he also puts baseball’s far-flung evolution in context, jetting from town to town across the Eastern seaboard and the Midwest to illustrate how other locations began to adopt the game—or resist it via strict laws that prohibited public ball playing. The author also emphasizes the game’s origins as a courtly, gentlemanly pursuit, conveying the ethos of an era when the spirit of baseball was pure fun and social comity, not the profit-driven venture it is today. Morris also debunks the persistent legend of Abner Doubleday as the founder of baseball. Dedicated statistics geeks will revel in the seemingly inexhaustible supply of arcane facts and figures, but casual baseball fans may be overwhelmed.

A useful reference for diehard baseball historians; others can leave this one in the clubhouse.