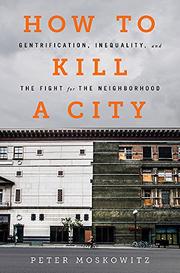 HOW TO KILL A CITY

Gentrification, Inequality, and the Fight for the Neighborhood

A freelance journalist reveals the many evils of gentrification.

Moskowitz, a former staff writer for Al Jazeera America, pulls no punches in his depiction of gentrification as “a void in a neighborhood, in a city, in a culture…a trauma, one caused by the influx of massive amounts of capital into a city and the consequent destruction following in its wake.” The author takes as his examples the cities of New Orleans, Detroit, San Francisco, and New York, places where he sees gentrification not as a product of cultural and consumer choices but as the result of specific policies by politicians, urban planners, real estate firms, and heads of corporations. These policies are often unfavorable to the poor, benefitting the accumulation of capital by the rich. In New Orleans, writes Moskowitz, Hurricane Katrina gave politicians the opportunity to re-create it as a whiter, richer city, as did the near-bankruptcy of New York City and the bankruptcy of Detroit—at least in its downtown and midtown areas. In San Francisco, the author describes the rapidly rising rents that are forcing working-class people out as the mayor courts technology firms to come in. Moskowitz chronicles his visits to each city, telling the stories of individuals affected by gentrification and in some cases fighting against it. New York is a special case, for there, his home city, the author sees himself as both a gentrifier in his changing Brooklyn neighborhood and as a victim of the earlier gentrification of the West Village, where he grew up. In the final chapter, Moskowitz draws on the work of academics and activists to present a list of six tactics for resisting gentrification, but ultimately, he asserts, there will be no solution without much greater economic and racial equality.

A harsh critic of the forces changing urban life paints a vivid and grim picture of the future of American cities.