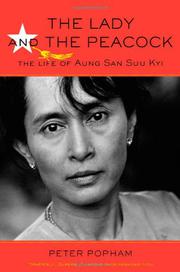 THE LADY AND THE PEACOCK

An inspiring biography and a rare glimpse of what Burma could have been, and could still be.

Aung San Suu Kyi, one of the world’s most famous female politicians, is unusual in that she has never held an official position of power. The daughter of Aung San, Burma’s national hero, Suu Kyi was a housewife, scholar and low-level functionary of the United Nations before her mother’s illness forced her to return to the land of her birth in the late 1980s. Thrust to the head of the nation’s protest movement, she helped found the National League for Democracy and led the party to a landslide victory at the polls. However, the results of the election were nullified, and she has spent most of the years since under house arrest. Independent foreign correspondent Popham (Tokyo: The City at the End of the World, 1985) ably chronicles the trials and tribulations of a nation that has been imprisoned and brutalized by an avaricious, paranoid military junta, an entity that has never demonstrated the slightest hint of concern for its victims’ welfare. The picture that emerges is of a stoically determined woman of uncommon fortitude who gave up the chance to say goodbye to her dying husband in order to stay in Burma when her country needed her, and who has never considered shying away from the duty she inherited to shepherd her people to self-determination. Against the odds, she has survived assassination attempts. Finally set free in 2011, “she emerged, to the jubilation of thousands of her supporters and the relief of the world, into a new landscape where she had no role.”

In the aftermath of the first, tentative loosening of the military’s death grip over the country, Suu Kyi’s next chapter remains to be written. For now, enjoy this compassionate biography of an exemplary leader.

IN THE SHADOW OF THE BANYAN
by Vaddey Ratner
Nonfiction

A DAUGHTER'S MEMOIR OF BURMA
by Wendy Law-Yone
Nonfiction