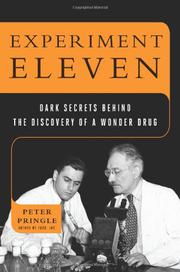 Dark Secrets Behind the Discovery of a Wonder Drug

The stage was set in 1943, when the future Nobel Laureate Selman Waksman headed the Department of Soil Microbiology at Rutgers University and President Roosevelt launched a major initiative to identify and develop antibiotics to treat animals and humans and to deal with the potential threat of biological warfare. Among the graduate students in the department was Albert Schatz, who was analyzing soil samples in an attempt to find an antibiotic that would cure tuberculosis. In his 11th experiment he succeeded, isolating two strains of a microbe—one from a soil sample and the other from a throat culture taken from a chicken's throat—given to him by a fellow graduate student. In fact, he had discovered the drug later to be named Streptomycin. Pringle gives a fascinating account of the steps on the road to turning it into a pharmaceutical—determining its effectiveness, testing for toxicity and side-effects, etc. Although the first announcement of the discovery was made jointly by the professor and his graduate student, Waksman began taking sole credit, pressuring Schatz into relinquishing patent rights to Rutgers and hiding the fact that he was being paid a significant percentage of the royalties. Ultimately, Schatz sued Waksman, and an out-of-court financial settlement was reached. Though it acknowledged Schatz's part in the discovery, Waksman's reputation and prestige remained intact and he alone was awarded a Nobel Prize.

A gripping account of academic politics and the birth of the pharmaceutical industry.