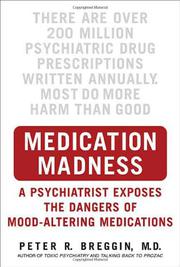 A Psychiatrist Exposes the Dangers of Mood-altering Medications

Reforming psychiatrist Breggin (Your Drug May Be Your Problem: How and Why to Stop Taking Psychiatric Drugs, 1999, etc.) argues forcefully that antidepressants, stimulants and mood stabilizers do more harm than good.

When patients taking psychiatric medicines are unable to recognize their mental or emotional impairment, the author refers to them as victims of “medical spellbinding” or, in its extreme form, “medication madness.” The cases he cites here, drawn from his own clinical practice and from legal actions in which he served as a consultant or medical expert, frequently involve extreme adverse reactions: mayhem, murder and suicide. Each is a horror story, complete with details of the specific drug the person was taking, why it had been prescribed, the bizarre behavior he or she exhibited and the consequences to the patient, the family and/or innocent bystanders. Breggin has harsh words for those he finds responsible: medical doctors who routinely prescribe powerful psychiatric drugs; the pharmaceutical industry that hypes them; and especially the FDA, which “repeatedly compromises its original critical concerns and caves in to drug-company interests.” Doctors, he cautions, can only be trusted as far as the pharmaceutical companies that provide them with information, which is not far. For those currently taking psychiatric drugs and alarmed by his dire warnings, Breggin advises against stopping their meds without professional help, and he makes it clear how hazardous the process is even with that help. For everyone else, he offers this advice: Do not take psychiatric drugs and do not let them be prescribed for your children. Instead, take responsibility for living your own life as ethically and courageously as possible. To that end, he rather self-importantly offers his own “Principles of Life.”

A powerful polemic expressing the author’s anger—and his ego.