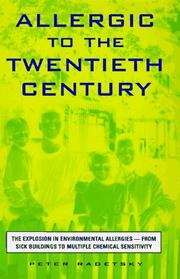 ALLERGIC TO THE TWENTIETH CENTURY

An investigation into the phenomenon of multiple chemical sensitivity (MCS), a condition that, like chronic fatigue syndrome, is regarded with considerable skepticism by much of the mainstream medical community. Science writer Radetsky, a regular contributor to Discover magazine, interviewed sufferers, activists, so-called environmental physicians, and a variety of traditional medical specialists to probe the nature of this controversial new illness and how it's being treated. His depiction of the extreme steps taken by some to create safe, toxin-free environments for themselves—porcelain sleeping cubicles, aluminum-foil-lined rooms, water-filled moats- -makes it easy to see why they have often been dismissed as obsessive, if not paranoid, hypochondriacs. While environmental physicians are convinced that MCS is a valid disease caused by exposure to chemicals in the environment, most conventional allergists see it as a psychological problem. Radetsky talks to a psychologist who treats it with traditional psychotherapy in combination with relaxation, feedback, and other approaches; an immunologist who sees it as the first symptom of serious autoimmune disorders, such as lupus; a pulmonary specialist who views it as a respiratory disorder; and a psychiatrist who hypothesizes that it is a physiological illness involving the brain's limbic system. While most MCS sufferers are white, middle-class, middle-aged women, Radetsky notes that Gulf War syndrome, whch has virtually identical symptoms, is overwhelmingly an affliction of young, active men, a fact that he feels may give MCS some credibility as a genuine disease. Needed now, he says, are controlled clinical studies to determine the cause of chemical sensitivity, plus some serious measures to clean up the environment. An appendix lists support groups, environmental consultants, and sources of safe products. MCS sufferers may see this as another Silent Spring, but the AMA will take more persuading. (Author tour)