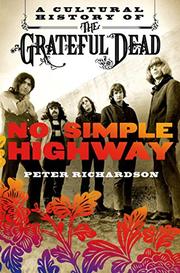 A Cultural History of the Grateful Dead

Far-ranging look at the ultimate jam band in the acid-drenched context of their formative years.

Richardson (Humanities/San Francisco State Univ.) opens his account, fittingly, with a look deep within the pages of Aldous Huxley’s The Doors of Perception, a book that “recounted a single day in the life of an English intellectual tripping on mescaline in and around his Hollywood home.” Intellectual, hallucinogen, California: Voilà, the ingredients of the Grateful Dead, a band born in the heady Bay Area coffeehouse, bookstore and Beat poetry heyday. Richardson wisely locates the band within that tradition, allowing for lashings of British Invasion pop and old blues and for the particular eccentricities the region has always permitted. The author ascribes much of the culture change of the 1960s to the Dead’s discovery that, if they were the weirdest of all the guys in Frisco, there were plenty of like-minded weirdos around the country. In the days before the Internet, connecting with those people and building communities required constant touring, and so the band also became as known for its dedicated work-shopping and endless roadwork as for its devotion to the lysergic arts. It’s now more than half a century since the band began to form, so one supposes that it’s necessary, as Richardson does, to explain who Ed Sullivan was and why Harry Smith’s folk anthology was so important to the nascent counterculture. Along the way, the author raises such important matters as the ascent of Ronald Reagan, Jerry Garcia’s opposite in nearly every respect, and the role of the Dead as both cultural interpreters and cultural pioneers, a role that is very real, no matter what one might think of hourlong jams on variations of “Johnny B. Goode.”

Not quite as smartly conceived and written as Greil Marcus’ Invisible Republic (1997), but a kindred book that helps locate an influential musical group in time and place.