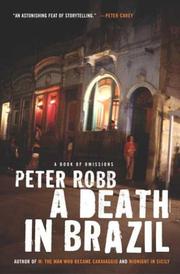 A DEATH IN BRAZIL

A Book of Omissions

Under intellectual scrutiny from a part-time resident, the world’s fifth largest country comes alive as “the oddest and most thrilling” in our hemisphere.

Readers who pick this up expecting a travel guide will have to look beyond open sewers befouling pristine beaches and bags of garbage flung from apartment windows into the street where urchins sleep in cardboard boxes—and those are the lucky ones—to find Brazil’s real allure. But Robb (M: The Man Who Became Caravaggio, 2000, etc.) does find it, and it runs sensuously deep and mysterious. The biggest mystery: Why is a country of such beautiful people with such variegated lushness still constantly gashed by violence, cruelty, and corruption? The source, Robb offers, is a gap between richest and poorest “six times greater than countries like China, India, and Pakistan” and perhaps unequaled anywhere. He tracks Brazil’s culture of concentrated personal power and wealth from the colonial era, finding a strain of conspiratorial racism perversely at odds with a society where slavery was officially banned in 1888 and racial mixing has been energetically pursued for half a millennium. His “researches,” which include an attempt (after a few Scotches in a bar) to confront a political thug suspected of several murders, reveal how a government deformed by influence peddling, corruption, and a menacing military has managed to ignore the most basic needs of traditionally disenfranchised constituents. Robb, however, views current President Lula da Silva as something of a messiah in a country where pursuit of sensual pleasures and a big lunch has thus far thwarted development of a public conscience. Fortunately for adventurous readers, a researcher of mysteries also has to take time to nourish body and soul with things like grilled needlefish or the sumptuous polyglot bean stew called feijoada, washed down with Antarctic beer chilled to the point of freezing.

An affectionate, probing cultural portrait, as stark as it is entertaining.