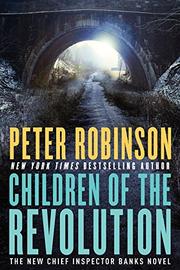 CHILDREN OF THE REVOLUTION

Robinson’s latest Inspector Banks novel is an English murder mystery sure to please lovers of the genre.

The body of Gavin Miller shows up on a lonely pathway beneath a railroad bridge in the Yorkshire countryside. Was it an accident? Or suicide? Or murder? The dead man has £5,000 in his pocket, so robbery seems an unlikely motive. DCI Alan Banks heads the investigation, which leads him and his team to ask unwelcome questions of some rich and powerful people. Banks digs deeply, learning about radical political pasts dating back to the 1960s and '70s, when people read Karl Marx, talked of revolution and did plenty of dope. Today they think that’s all in the past, and the past won’t return to haunt them. In any event, Miller had seemed like a shabby loser and a drunk—so what was he doing with all that money? Responding to outside pressure, Banks’ boss tells him to back off the investigation, which of course a good fictional detective doesn’t do. He and fellow detectives Cabbot and Winsome are smart and determined, with just the right amount of attitude to make them likable. Readers who grew up in the age of bands like The Doors and Led Zeppelin will appreciate the frequent references to the rock music of that era. Robinson’s descriptions are rich and beautifully done, although now and then the detailed scene-setting slows the pace too much. This is a mystery that depends less on action than on DCI Banks’ thought process. It's well-plotted and satisfying right to the end.

Robinson has won many awards for his Detective Banks novels (Watching the Dark, 2013, etc.), and with this latest, he demonstrates his mastery of the craft.