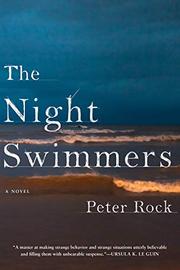 “Part of my pleasure of swimming in open water, especially at night, is that it makes me afraid.”

In the summer of 1994, our unnamed narrator, a 26-year-old aspiring writer, meets Mrs. Abel, the mysterious young widow with whom he voyages by night through the swells and currents of Lake Michigan. To the narrator, and to the summer community on Wisconsin’s Door Peninsula, Mrs. Abel is an enigma: She’d been married to Mr. Abel, whose name she wears like a keepsake throughout the novel, for less than a month before his death, and the cabin that she’s inherited is so sparsely decorated that everything in it—her husband’s now-scentless clothes, a wooden bird carved by a friend, a painting by Charles E. Burchfield of a forest fire marching toward a cabin—seems to possess, in the narrator’s eyes, the significance of an artifact, of objects kept because they serve as mementos of missing people or missing times. By swimming together at night, Mrs. Abel and the narrator build a secret relationship out of their shared passion—but the relationship ends prematurely when one night near summer’s close the swimmers arrive upon a strange shoal far from shore and, while exploring it, Mrs. Abel somehow disappears. Twenty-ish years later, the narrator—now a successful novelist who lives with his wife and two daughters in Oregon—is reconstructing that summer, trying to get closer to who he was, and who Mrs. Abel was, and what happened that night on the water. To do so, he pours over the artifacts left behind by that time—photographs and artworks frequent the text, as do letters to and from his ex-girlfriend. He floats in a sensory deprivation tank, studying “the past, the future, [and] the hypothetical…hidden beneath the surface” of his thoughts. He consults Rilke, Burchfield, and Chekhov, among many others. And, most significantly, he writes—thus creating out of life’s artifacts a new artifact, this book, which serves as keepsake for both Mrs. Abel and the narrator’s youth, referring eyes back upon them across the years.

Part page-turner and part aesthetic treatise, Rock’s (Spells, 2017, etc.) latest is, like the currents of the Great Lakes, subtle and haunted, deeply complex and “quietly…sinister”; his readers, like his swimmers, ought to know “that the currents of the subsurface are likely to be moving.”