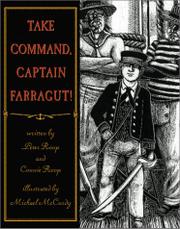 At age ten, David Glasgow Farragut became the youngest midshipman ever assigned to a warship in the United States Navy. In a series of fictionalized letters written to his father, Farragut relays the capture of his ship and three-week imprisonment pending parole. Beginning March 29, 1814, aboard a prison ship in Valparaiso, Chile, and ending April 20, 1814, on the 23rd day of captivity, the letters flash back to the time when Farragut’s father sent him to serve Captain Porter following his mother’s death. Porter is posted to the ship, Essex, which sets sail in the war against England. As one of the ship’s 11 midshipmen, Farragut faced many obstacles because of his age and particularly because of his small size. The voice in the letters rings with determination and strength, shaping the character of the young man whose name would stand in history. The eight black-and-white scratchboard illustrations in McCurdy’s signature technique are equally commanding, building the strength of the narrative with hewn details of ship life and creating still life images of the drama of the action. A glossary defines nautical terms and the authors’ note cites the sources for their research that includes Farragut’s own accounts of his life. An unusual presentation that could spark interest in this exceptional young man. (Historical fiction. 8-11)