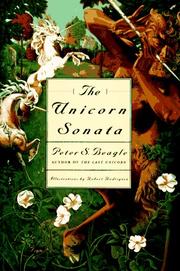 Familiar territory for the author of The Innkeeper's Song (1993), etc. In Woodmont, Los Angeles, young Josephina ``Joey'' Rivera spends much of her spare time helping out in old John Papas's dusty music shop. One day, in steps a striking young man, Indigo, with an unusual horn he hopes to sell for gold—more gold, indeed, than Papas can readily lay his hands on. On the horn Indigo plays a strange, haunting music that, even when he leaves, Joey can still hear; following the music, she unwittingly steps into another world, Shei'rah, where the Eldest—unicorns—live. Joey is befriended by Ko, a shaggy, lovable satyr, and by eager young unicorn Touriq; sadly, she learns from Lord Sinti that all the Eldest are going blind, for reasons none can fathom. Returning home, Joey finds that Indigo (another Eldest) prefers to live on Earth in human form; selling his horn will enable him to live comfortably, though without it he cannot return to Shei'rah. On her next visit to Shei'rah, Joey brings along her beloved, wise grandmother, Abuelita, who remembers an old folk remedy for blindness whose chief ingredient is—gold! So Indigo must relinquish his gains in order to save the Eldest, whose blindness he caused in the first place with his greed for gold. This slight, insubstantial fable has lyrical intentions, but ends up just self-consciously picturesque; though the strained, flimsy plotting and blurry details don't help, Beagle's deserved renown as a leading unicornologist might carry readers along. (11 full-color illustrations, not seen) ($100,000 ad/promo; author tour)