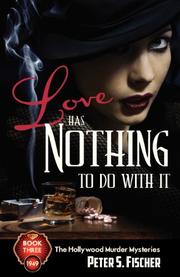 Love Has Nothing to do With it

The third installment in Fischer’s (We Don’t Need No Stinking Badges, 2011, etc.) Hollywood Murder Mysteries series finds Warner Bros. publicist Joe Bernardi finally back on his feet after his failed marriage to the alcoholic Lydia and happily living in sin with “oversexed” Bunny Lesher. But after Tyler Banks—the married, all-around cad for whom Lydia left Joe—is found dead with a shot to the head, with Lydia the prime suspect, Joe finds himself pulled back into a complex web of addiction, deceit and adultery. He endeavors to prove her innocence, but true to murder-mystery form, it’s no cut-and-dry case. When it becomes clear that the authorities are more interested in pinning the crime on Lydia than pursuing justice, Joe must team up with a detective sergeant with whom he has a rocky history and Lydia’s new gentleman friend, a bondsman. Joe’s a busy man, though, and he struggles to balance his responsibilities to Bunny and work with his sense of obligation to Lydia, despite her betrayal years earlier.  Fischer’s latest is fast and fun, bursting with believable period details and full of colorful characters, though they can—like the villainous Tyler—sometimes feel one-dimensional or, in the case of Bunny Lesher, who’s alternatingly jealous and in heat, slightly sexist. (Politics in the book are, like everything else, a bit old-fashioned, and occasional typographical errors don’t help clear things up.) Occasionally but always unobtrusively, Fischer incorporates elements previously established in the series, like Joe’s back story with the sergeant, so the book works just as well as a stand-alone. Tyler’s long-suffering wife, Amanda, is easily Fischer’s most compelling character—a privileged but dissatisfied wife and daughter who benefits financially and personally from her husband’s death. Like everyone in this Hollywood noir, however, she’s not quite what she seems.

Goes down smooth for murder-mystery fans and Old Hollywood junkies.