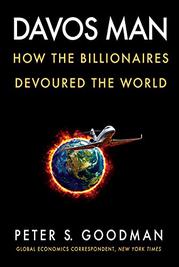 How the Billionaires Devoured the World

The consequences of unfettered avarice.

New York Times global economics correspondent Goodman mounts a scathing critique of the greed, narcissism, and hypocrisy that characterize those in “the stratosphere of the globe-trotting class,” many of whom gather at the annual World Economic Forum held in the Swiss Alpine town of Davos. Davos Man—an epithet coined by political scientist Samuel Huntington—is “an unusual predator whose power comes in part from his keen ability to adopt the guise of an ally.” The “relentless plunder” perpetrated by Davos Man, Goodman argues persuasively, “is the decisive force behind the rise of right-wing populist movements around the world,” leading to widening economic inequality, intense public anger, and dire threats to democracy. The author closely examines five individuals: private equity magnate Stephen Schwarzman; JPMorgan Chase executive Jamie Dimon; asset manager Larry Fink; Amazon’s Jeff Bezos; and Salesforce founder and CEO Marc Benioff, who promotes himself as “the most empathetic corporate chieftain.” At the same time that these men broadcast their concern for social justice, they enrich themselves by manipulating economies, lobbying politicians, eviscerating regulations, weakening government oversight, and extracting huge tax benefits. Fink’s professed concern for the environment, for example, is really an alarm about risk to investments: “In a world under assault by rising seas and turbulent weather, how safe was real estate, and what were the implications for mortgage-backed securities?” During the mortgage crisis, Schwarzman’s company bought foreclosed properties, amassing a large inventory that it leased to desperate renters. With their yachts, multiple mansions, and private islands, they prove themselves “unmoored from the rest of human experience.” Reining in Davos Man, Goodman asserts, “can happen only through the exercise of democracy—by unleashing strategies centered on boosting wages and working opportunities, by erecting new forms of social insurance, by reviving and enforcing antitrust law, by modernizing the tax code to focus on wealth.”

An urgent, timely, and compelling message with nearly limitless implications.