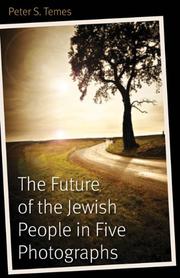 THE FUTURE OF THE JEWISH PEOPLE IN FIVE PHOTOGRAPHS

Reflecting on his faith, an educator decodes some snapshots from the Jewish family album.

Temes (The Power of Purpose, 2006, etc.) selected honored teachings with his personal convictions to decide how to be Jewish today. The picture on which he bases his first essay recalls Darius, the Zoroastrian ruler. At the time, Jewish intermarriage was high and birth rate low; would Judaism become, like Zoroastrianism, a lost religion? The dangers of assimilation are raised again with the image of the Jews of Kaifeng, in China in 1910. Next is the familiar photo of Rabbi Abraham Joshua Heschel on the march with Martin Luther King Jr. How far, we are asked, is one obliged to go to repair a broken world, as Jews are called upon to do? A picture of the trial of Adolf Eichmann, who followed orders to murder millions, elicits a call to think and to decide how right might prevail over might. Finally, there is snapshot of a female Torah scribe. Is a relation to God best mediated through fixed Scripture or firsthand? Is there a middle path to find the hidden canonical ways to repair the world? Is Judaism a universal theology or a special religion? Temes reviews some of the divergent ways his religion is practiced in a time of baleful demographics, factions and indifference. He explores the possibility of a middle ground somewhere between exacting adherence and careful evolutionary change. The author’s thoughtful sermons, drawing on diverse authorities, reveal a passionate understanding of his faith.