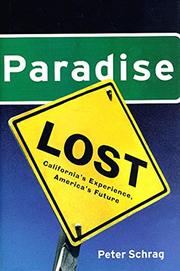 An enlightening—and dismal—view of the Golden State's economic decline from a former editor of the Sacramento Bee. Schrag takes the point of view that the principal cause of California's waning from a major industrial state to its present fiscal nightmare is the voter-initiated proposition system. And the culprit of all propositions, according to him, is Proposition 13, passed in 1978 to drastically limit property taxes and reassessments, thereby diluting the quality of California's once exemplary public-school system (which drew the majority of its funding from property taxes). The issue is complicated. Schrag acknowledges that the proponents of Proposition 13 were unfairly assessed by the preexisting property tax system—that people who were living on the same streets and in comparable houses were absorbing tax discrepancies in the thousands of dollars. And he observes that to fund schools via property taxes is inherently dubious; the practice fails to provide equal funding to all districts, and thereby may violate the Equal Protection clause of the Fourteenth Amendment. The continuing problem, Schrag notes, is that Californias rising minority population, desperately needing the public funding that Proposition 13 has eliminated, is still largely governed by a conservative white electorate much like that of Orange County (from which Proposition 13 sprung). Finally, the author addresses the inherent fault of a plebiscite system: Direct democracy, so-called, leads to tyranny by the majority and thus excludes the Jeffersonian principles of individual rights guaranteed by the Bill of Rights. Schrag deals out political blame equally, finding as much fault with Gov. Jerry Browns inaction over these issues as with Ronald Reagan for embracing the supply-side, anti-tax stance—in the Spirit of 13''—and moving it to the national level. Praise is due to Schrag for taking a complex subject and making it accessible.