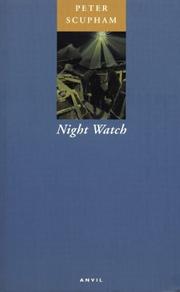 Peter Scupham, British lecturer, publisher, and poet (The Air Show) tackles issues arising from coming of age in the midst of the Cold War in this, his 11th collection of verse. The poems loosely fall into three sections. The first section explores the 20th century up through WWII—this section ends with “Crossing the Peak” (which characterizes the Cold War as an “entanglement of wing” shocking the mid-century British by “skating its hooks” on the “cold metal” of their victory over Hitler). The second section consists of “The Northern Line,” an 11-poem sequence describing an enlisted National Serviceman’s struggle to find a place in a 1950s atomic world. The final section offers meditations loosely linked by themes of memory, hope, and time. Scupham admirably tries to maintain thematic links between the poems he offers. Unfortunately this effort often seems contrived, as in his use of a photographic trope to connect “In the Picture,” “A Trunk of Letters,” and “In Camera” with other poems in the volume’s final section. When the links between poems are less explicit, several individual poems demonstrate impressive power. “Arras: Easter 1998,” a thoughtful meditation on how time transforms the wartime dead for the generations who follow, stands alone impressively. Likewise “Kilvert’s Winter: 1871,” which offers a glimpse into a socially polarized Victorian Christmas season, is compelling. While this ambitious collection often fails to make the connections which Scupham strives to achieve, it still generates moments of excellent poetry which redeem the volume’s unevenness.